Posted on September 8, 2014 by Rebekah Madrid

I’m thrilled this year to be teaching DP History again. It’s been a while (my entire time at YIS) and I’ve missed it. But in my years focusing on MYP and middle school, I’ve picked up some new teaching strategies that I knew I could use with my grade 11 “historians”. So this year I hope to document how I challenge my DP students, get through the curriculum, keep the class relevant and ensure that the focus of the class is on student learning.

One of the strategies I have started to use with my grade 11 students are the Making Thinking Visible Routines. Now I know that MTV is often thought of as an elementary exercise. Or as something good for scaffolding thinking with middle schoolers. And perhaps MTV may not the best fit for pre-college level course. But I also know that the kids in my classroom are 15 and 16 years old. They are just starting their Diploma Program process and they still need help clarifying their thinking. I also know that by grade 11, grades and GPAs really do matter and it’s not fair of me to just throw a test at them without at least trying to see if they had an understanding of the time period we are studying (the complicated Origins of WWI).  And finally, I am not the same teacher that used to believe that lecture and quizzes was the only way to teach this course. So with that I introduced some making thinking visible routines (including a non-official routine) to see if my students were really thinking and engaging with the history we are studying. 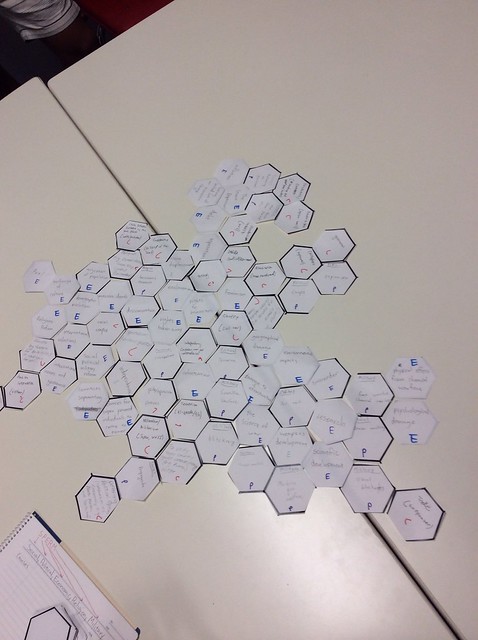 I had first heard of Hexagon Thinking as part of my exploration last year of Design Thinking. The NoTosh website defines hexagon thinking as:

where either student or teacher writes key concepts on hexagonal cards, at the end of a period of learning, where the content behind each ‘headline’ is relatively clear to a team of learners. The students then place the cards together in the way that makes most sense to them – some ideas will connect to up to five others, others will lie at the end of a long sequential order, others still will appear in small outlying positions, on their own.

For my purposes I wanted my students to being thinking about one of the major concepts we would be studying for the next two years: Causes, Practices and Effects of War.

One the first day of class, students were divided into groups, each investigating either causes, practices or effects. They brainstormed, used prior knowledge, and searched the internet. They wrote down their findings on hexagons*. And after about 20 minutes they came back together and tried to link all of the concepts.  Causes, practices and effects all joined together, and students demonstrated high level of thinking by making links between the three big concepts

Working at pulling it all together.

One of the most tricky bits of teaching DP history is ensuring the students understand the facts and the story, but think in terms of concepts and arguments. I want my students to move beyond the narrative and move to analytical.

I love how they just sit on the floor and get to work.

Now Origins of WWI is full of details and facts that can be hard to remember. So again, I had my students working in teams outline the events leading up to WWI for different countries. Out came the post-its. Russian events on pink, Balkans on green, Germany on yellow and everyone else on orange. Then we put them on a timeline, a piece a string down the middle of the table. They classified the events as alliances, militarism, nationalism, etc with letters. And the timeline looked good.  They looked pretty proud of themselves.

I then told them the timeline was no longer a timeline. They had to sort the events from most important factors leading to war and least important. We were now doing the tug of war routine. So they debated. And argued. And conversation started in a way it didn’t during the timeline.

Some advantages of this routine

This was probably the biggest flop of the routines I used. In preparation for our first test, I handed students the official IB mark scheme (aka rubric). These things are full of teacher-talk. In addition, I have several students who are used to the American-style of grading (points of 100 leading to a A-F). I wanted my students to really read them and understand what was being asked of them. So as I handed out copies of the markscheme, I asked them to complete the See Think Wonder routine. What do you see as you read the rubric? What do you think about the rubric? What do you wonder? My grade 11s did not like being asked to break down their thinking this way. Several kids said they got it the rubric and didn’t have any questions. Other kids just jumped around without really looking at the document. The deliberateness (and maybe the childishness) of the routine did not resonate.

That said I do think the See Think Wonder routine does have value:

So far I’m incredibly pleased with how the routines have worked in my class. They go incredibly quick with grade 11s, which is great. It’s a valid form of formative assessment. Most importantly it means the kids are a vital part of the conversation, not just listening to me. Next step will be using the routines for teaching sources analysis. Which to a dorky history teacher like me is actually kind of exciting.

MYP Humanities Instructor. International School Teacher in Japan. Google Certified Teacher. Apple Distinguished Educator. National Board Certified Teacher. Traveler & TV Watcher. This is where I write my thoughts about all of the above.
View all posts by Rebekah Madrid →
This entry was posted in Uncategorized. Bookmark the permalink.

1 Response to Visible Thinking: Not Just for Little Kids